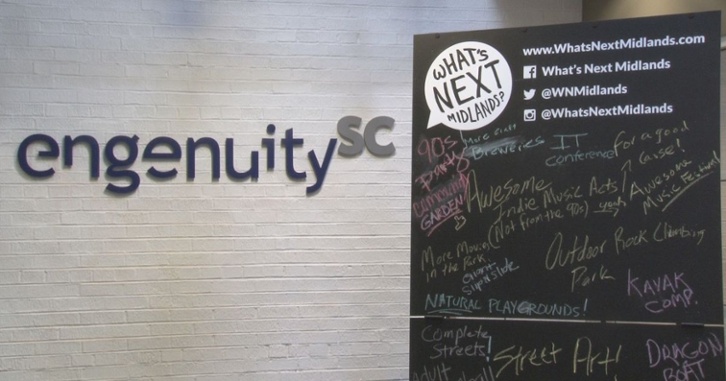 There’s an old saying that ideas are virtually worthless because they’re so easy to create. Ideas are like business cards after a networking event; we all seem to have stacks of them, and while we genuinely might want to do something with them, they seem to pile up or land in the recycling bin.

That’s why Columbia, SC -based EngenuitySC launched a new initiative called What’s Next Midlands. The site saves your ideas from the proverbial recycling bin, serving as a vehicle for collecting ideas that can improve overall livability in South Carolina. These suggestions, categorized as Culture, Parks and Rec, Public Safety, Infrastructure, Business and Education, are then “upvoted” by other users on the What’s Next Midlands website, and, if everything goes smoothly, the two most popular ideas will be implemented by June of this year.
Admittedly, the entire process sounds pretty fast. Maybe even a little too fast. But for David Laird, Director of Community Impact for the Central Carolina Community Foundation, which helped fund the project through its Connected Communities grant, it’s a pace and a platform that could shape a more action-oriented mindset throughout the Palmetto State.

Our Columbia contributor, Xavier, sat down with Laird to discuss the entire process.

Xavier Edwards: What exactly is What’s Next Midlands?

David Laird: What’s Next Midlands is a social civic innovation program that allows individuals from anywhere in the community — Lexington, Richland, wherever — to submit an idea on what they would do to make the community better. What separates this from other idea generators that we’ve seen across the country is that we have an army of 500 volunteers ready to go. The goal is to have two of these ideas implemented by the end of June.

XE: Who were the project’s founders?

DL: This idea started percolating a few years ago and is the brainchild of Meghan Hughes over at EngenuitySC and Greg Hilton [of the SOCO co-working space]. The Central Carolina Community Foundation was able to support it through our very first Connected Community grant, which fit into the foundation’s overall idea of building a stronger community through vibrant social offerings and superb public spaces.

XE: What goes into the process of deciding which ideas are chosen?

DL: You know this is just basic democracy in the purest sense because anyone can share their ideas. You, your friends or your family can “like” it — all you need is a Facebook account. The ideas that rise to the top will be sent to the management team at Engenuity where they’ll say ‘okay here’s what’s feasible, here’s what’s in the budget and here’s what will have the greatest impact.’

XE: Would an idea that’s unlikely to get completed or maybe a little farfetched ever get chosen?

DL: You know the great thing about this is that none of these ideas will go away. Even if an idea doesn’t get selected by the end of June, we’re still going to keep them in there. What we hope this will do is create an energy; create some activism on behalf of the region. So that even if What’s Next doesn’t do it, it’ll give somebody the spark to say ‘I wanna do this’.

XE: How do you stay unbiased during the idea selection process?

DL: That’s something that we’re going to figure out in the next few weeks, but right now we’re mainly focused on getting the ideas in. We want to be careful that the ideas do have a sustainable impact on the community and that they do not create a financial burden. We want this to be a gift.

XE: Personally, what do you want to see?

DL: It’s not that I’m looking for any specific thing. What I want to see is a level of excitement. I want to see a new vibrancy to the place we call home. And I want people to get activated in terms of creating a better place. I think we are in an amazing time right now in the history of our city where we are changing the sense to one of optimism. People are embracing this and asking what they can do and how to be a part of it. I think that’s the most exciting thing right now.

—
Do you have your own ideas on how to make the Midlands a better place? Head over to whatsnextmidlands.comto throw your hat in the ring. And remember, no idea is too big or too small.