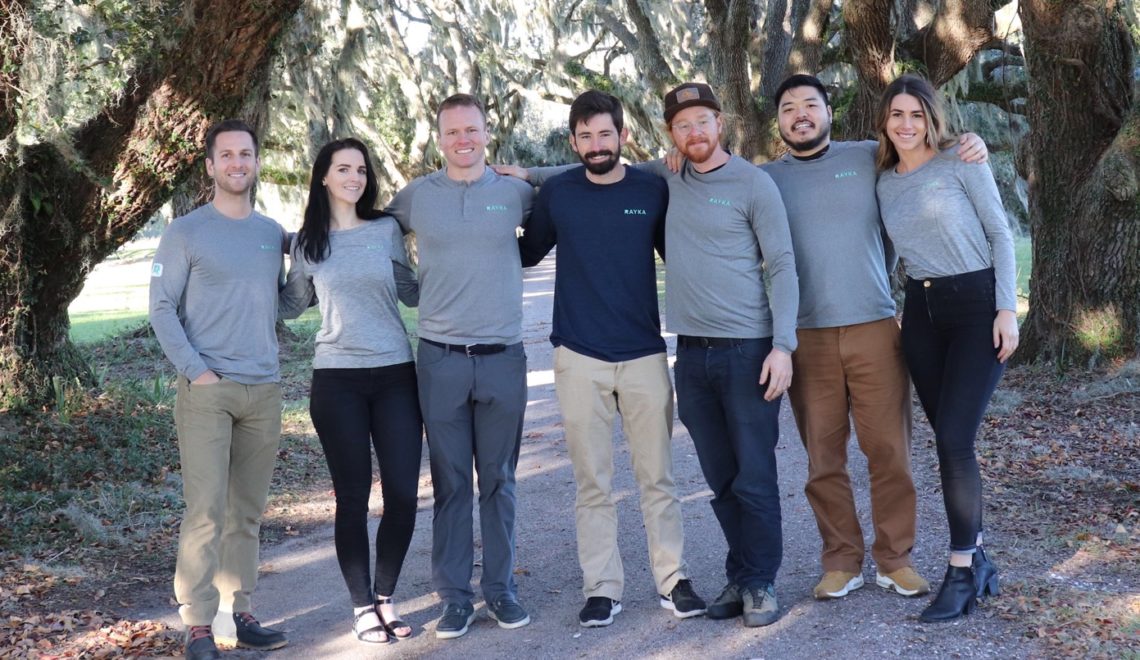 Sanford founded Rayka following graduation from Vanderbilt in 2017. He has since expanded the team to include the youngest American to travel to every country in the world plus a bevy of advisors who range from Uber executives to the founder of Plated. Most recently, Rayka won first place in the Atlanta Startup Battle, claiming a $1000,000 prize.

So how does it work? Rayka uses a social media format to recommend restaurants, activities, and more based on what an individual wants to get out of their travel experience. This new way of tailoring user recommendations to Rayka’s own audience with the goal of providing a meaningful travel experience, utilizes the interconnectivity of technology to create a larger community.

Read DIG SOUTH’s “What’s your story?” Q&A with Landon Sanford to learn about the benefits of the app’s format, why Charleston is the perfect place for Rayka’s home base, plus, get a few insider tips from Rayka CEO Landon Sanford.

When and how did your own experiences with travel inspire you to start Rayka?

I grew up traveling throughout my childhood and college, and many of my friends knew that. I was frequently asked for recommendations for restaurants and experiences in places I’d been to, which is what brought me to the realization that people don’t have a place to easily source and share recommendations with their friends. When I started working on solving this problem at home in Charleston, I realized it would be the perfect place to start. Charleston is home to an amazing food and beverage scene, and review sites are failing at helping people sift through the thousands of restaurants to find what fits their tastes the best.

Rayka’s recommendation-based system makes it different from other platforms; why are recommendations better for travelers than reviews?

On standard review platforms now, 4.3 stars is the average ranking and 40% of reviews are fake or paid for. This just isn’t helpful: they aggregate [bogus reviews] and typically show the most touristy places in town. Plus they don’t account for the differences between demographics or the differences in levels of expertise; for example, a bar might get a 5 star review from an 18 year old but a 1 star review from an 80 year old, or a review from someone who has been to 150 countries is weighted the same as someone who never left their state. So our platform is based on recommendations from real people – friends, celebrities, experts, and groups of people you might find interesting or relevant, such as couple travelers, flight attendants, travelers who’ve been to over 150 countries, vegans, etc. It’s less of a focus on recommendations versus reviews, and more of a focus on people. Instead of lumping everything together into a 4.5 star review, we focus on highlighting lists and recommendations from trustworthy preferences, sources, and expertise.

Charleston is undoubtedly a food-oriented city that attracts a large number of tourists. As a Charleston native headquartered in a city that is so often-traveled to, did that help introduce Rayka to users?

In our opinion, Charleston is the perfect place to call Rayka home. It’s been ranked the #1 city in the world several times by Conde Naste, it attracts millions of tourists a year, and both the food and startup tech scenes have really been growing in recent years. I was born and raised in Charleston so it’s been amazing seeing how much it’s changed. For Rayka, it’s allowed us to tap into a supportive community in a niche environment that is easier to connect with – if we had been in San Francisco or New York, we would have been one of ten thousand other startups clamouring for attention from users, investors, and from the community.

A recent study* shows that millennials would be willing to give up coffee and Netflix to have the opportunity to travel. Do you think travel appeals to millennials because it is so interconnected to social media?

The vast majority of millennials today really value experiences far more than ownership of things. I think social media definitely has had an impact on this because those platforms show your friends what you’re doing and where you’re going to in real-time. We actually surveyed several thousand college students earlier this year about what platforms they use when they travel, and over 80% of them said they use Instagram the most, while hardly any mentioned traditional review platforms and resources. That’s had a big impact on our product direction. For example, we’re going to be focusing a lot more on high quality video and images for some of the next rollouts we have lined up, and on being able to quickly ‘pin’ something to one of your lists rather than write out a long lengthy description. Social media has definitely made travel and experiences more and more appealing to millennials, and plenty of studies have shown that to be the case.

Has it been advantageous to create travel-based recommendations in a “social media” app format? Has Rayka tapped into a younger audience using the social media market?

I would say creating a platform in a ‘social media’ app format has had both benefits and challenges. It allows us to design the app in ways that are similar to other social media platforms so we don’t have to ‘rebuild the wheel’ and design something completely from scratch, but there are already so many social platforms and apps that everyone’s time is harder and harder to capture. I’d say the main difference for us is that we are focused on pushing you out into the world, rather than deeper into your phone. On platforms like Instagram, their goal is to get you to spend 3 hours on it scrolling and wasting time without realizing it. For us, our goal is to get you to spend 3 seconds on it and then you’re out the door trying an amazing new restaurant, hidden gem, or experience. Rather than being based on comparison, we’re based on exploration. Right now our main users are millennials, mainly female, mostly affluent, and I think they’re all explorers at heart: they want to find those stunning, unforgettable places and locations that might even only be a five minute drive away and want a resource to help them find and record those spots.

What has been your favorite personal experience using Rayka?

When I was in Denver, I saw that a friend of a friend on Rayka had recommended this restaurant not too far away that he said had ‘the best hummus he’d ever had.’ I ended up having dinner there and it was probably my favorite meal of the year so far. If I hadn’t had Rayka, that place would have just been another 4.5 star spot that I would have missed, but because of his recommendation (or ‘raykamendation’) I was able to discover it. It was a perfect example of the second and third degree connection that we help solve; if I knew a best friend who was from Denver, I would have just texted him to ask for recs, but for that random friend from college, that person I used to work with, that friend of a friend, or that person who I don’t know but seems to share similar tastes, I think that’s where we come in and solve a real gap in the market.

What is your best tip for travelers using Rayka who may be exploring a new country or city?

For travelers using Rayka to explore a new country or city, I would say that my advice depends on the type of traveler you are. If you’re young or looking for inexpensive options, I’d follow the ‘budget travelers’ or ‘college students’ groups on Rayka and see what people from those communities recommend. Or you could see what ‘couple travelers’ recommend, what people who’ve been to ‘100+ countries’ recommend, etc. It depends on who you are and what type of experience you’re looking for when you travel. Or, ideally, if you have some friends or friends of friends who are using Rayka, follow them and see what they recommend in those new countries or cities. The best tip I have is that most online resources or a simple Google search brings forth results that are generic to anyone, and you should instead focus on opinion that is more directly related to who you are.

The mission statement of Rayka is to disrupt the outdated review industry. Do you think, so far, using the app has changed the way you or Rayka’s users travel?

Our mission statement is about inspiring the explorer within all of us. We want to push people out into the world, rather than deeper into their phone. I think the app has changed the way a niche passionate group of people explore, but we still haven’t started to push out to the broader market. This past year has been more focused on tweaking the product based on feedback and getting closer to product market fit, and later this year and next year should be when we begin to focus on expansion. But I’d say that our goal is not about changing the way people travel, it’s about changing the way people explore, including on a local basis. We want to help people find unforgettable experiences near them, whether that’s on a trip or right around the block.

Rayka recently won 1st place – plus $100,000 – at the Atlanta Startup Battle, which must feel extremely encouraging. How are you using this forward momentum to further develop Rayka in the latter half of 2019?

Winning Atlanta Startup Battle was incredibly exciting. That win allowed us to raise our major first round of funding this past January, and we’ll now be raising another round of funding at the beginning of this fall. The next few months will be exciting: we’ve got some major partnerships we’re working on, we just hired some amazing individuals, and we’re excited about really getting Rayka on the map.

Marketing and branding a social media platform is essential to its success, and Rayka markets itself as personable and reliable. With a whole world of countries and cities to explore, how do you think Rayka will continue to expand?

It can be easy for us to quickly focus on expanding globally, and to try to solve the challenge of having content everywhere around the world. But our goal is to focus more locally, and to take a city by city approach. Even just in Charleston alone, we haven’t reached our goals from a content and app design perspective. So I think Rayka will expand slowly in terms of marketing, but expand rapidly in terms of product development. The exception to that is expansion with groups and communities – we’ve now partnered with several organizations who want to share their own recommendations internally and privately within their communities. We’ll continue to partner with more and more of those groups.