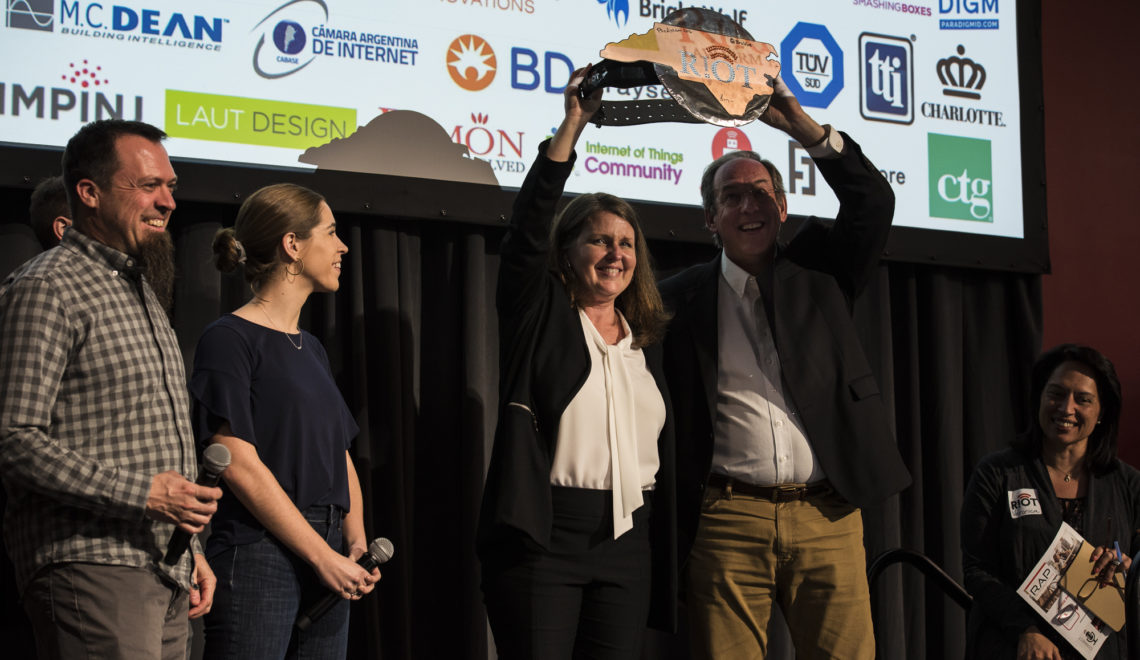 Many involved with tech and entrepreneurship in the South are aware of RIoT, an economic development organization headquartered in Raleigh that helps startups and companies utilize data and capture Internet of Things (IoT) opportunities.

RIoT has taken both the tech and startup world by storm, expanding quickly to meet the needs of those hungry to engage. What began as a local Meetup group in Raleigh, NC has become a global movement with partners from all over the world.  Startups have traveled from Spain, Switzerland and France to participate in the RIoT Accelerator Program (RAP). Applications have been submitted from as far as Israel, Argentina and Mexico. In 2019 alone, RIoT advised governments and industry in Ireland, Argentina, Slovenia and England on how connectivity and data are transforming the economy.

Not long after RIoT’s inception as the “Raleigh Internet of Things”, RIoT pivoted to “NC RIoT” to fill a greater need statewide. Six years in, it is time to pivot back to RIoT, but as a standalone brand and no longer a descriptor. Today, RIoT represents a movement that is much bigger than any geographical boundary.

To riot means to fight, to make some noise, to be passionate in driving towards a specific outcome. At RIoT the outcome we fight for is giving entrepreneurs the tools for financial upward mobility and freedom.  We promote economic growth regardless of location, background or demographics.  Inclusivity starts with going to where entrepreneurs are and not relying on everyone being able to come to you.

“RIoT will always love Raleigh and our North Carolina roots, but the RIoT movement is not meant to be territorial. At RIoT, we aim to help everyone,” said Tom Snyder, Executive Director or RIoT.

RIoT’s greatest asset is its community. The RIoT community has already reached a global level with more than 9,000 members across the world offering their knowledge, expertise and willingness to lend a hand.  RIoT’s 80+ corporate partners hail from four continents.  We recognize the creation of over 500 jobs over the past 6 years with over $325 million capital raised by RIoT-associated startups. We are thrilled to see growth beginning to hit an inflection point as more join the RIoT movement.

Below are some exciting examples of how the RIoT movement continues to grow.

We are announcing a change from NC RIoT back simply to RIoT to reflect our worldwide reach. We now have a new web site to reflect that change. The new domain name is riot.org.

You can visit the site to learn more about RIoT, join the movement by signing up for the newsletter or meetup group, and read up on the latest tech media and events.

Since January 2020, RIoT has hired three new employees, nearly doubling the size of its staff. The most recent hire and new Director of Partnerships, Amber Cobb, will be an integral part of engaging new partners and communities as RIoT continues to expand.

Amber joins us from the regulatory compliance industry, where she spent fifteen years helping both Fortune 100 companies and startups navigate the complex landscape of getting products into the global marketplace.

Amber has been involved with RIoT since its inception and is excited to join the team. When asked what she hopes to accomplish at RIoT, she said, “I want to grow our community locally, as well as globally, to the point where RIoT is recognizable to the general public… RIoT has so much to offer. The community in Raleigh is so interconnected and really involved in what we do. I’m excited to have the opportunity to showcase that as we grow into more communities.”

RIoT has seen the need to bring RIoT beyond North Carolina’s borders in a more permanent way. Startups from across the country have permanently relocated to North Carolina, recognizing the value of the RIoT ecosystem to their future growth.  Further demonstrating that the ecosystem is broader than RIoT’s Raleigh headquarters, Open EVSE, a 9-year-old electric vehicle charging company, recently relocated to Charlotte to take advantage of the resources in the region.

It’s RIoT’s goal to engage more companies. As we continue to grow, we’re bringing programs like the RIoT Accelerator Program (RAP) and our popular Lunch & Learn series to markets that are hungry to join the RIoT movement.

In the past year, RIoT expanded RAP to Wilson, NC, the Lunch & Learn series to Atlanta and just announced a partnership with Stafford, Virginia to explore opening a RIoT Labs location to serve startups and entrepreneurs in Stafford and the greater Richmond-DC corridor.

According to Tom Snyder, Executive Director of RIoT, the original goal of RIoT was simply to gather experts together to build understanding around IoT, what it actually meant and how to utilize it. “It became obvious that no one really had a clear understanding of IoT,” Tom explains, “but there was a huge thirst to learn.”

RIoT rose up and became the organization to fill that need, sharing its knowledge of IoT, data and entrepreneurship with startups and larger businesses to help the greater economy thrive. Reflecting on the evolution of RIoT from inception to where it is today, it’s astounding to see the kind of results that can be achieved when communities come together to “riot” for the cause of economic mobility and freedom.

Join RIoT’s Raleigh, Charlotte or Atlanta Meetup groups or visit riot.org to learn more and get a front row seat as RIoT continues to grow.